Well at our club we don't like stuff cluttering up the table. So instead of using dice to keep track of casualties we use casualty markers. Having said that they also need to blend in as much as possible. The solution of one of our members, Chris Johnson, was to cut a metal disc and stick a numbered disc on top with a small pin into the base which was then textured and a casualty figure added.

Now handled badly these pins hurt!!  Chris suggested using my laser cutters to come up with something involving magnets and a strip of metal. This is the result. Now the originals went from 1-8 which was fine for Black Powder but don't go high enough for Picketts Charge/Gd'A etc etc. A disc up to 20 should cover most games i think.

Anyway here is how to put them together. 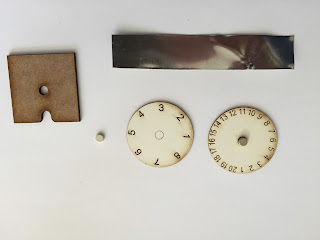 4 pieces per marker with either 8 or 20 number disc. 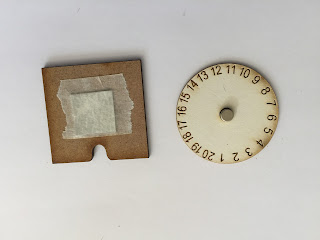 At firs i superglued the metal piece over the hole but when it came to texturing the glue obviously didn't work on the metal. The simple solution was to stick it on with masking tape and once the pva glue is applied and texture added everything stays firmly where it's supposed to be. Superglue magnet to the middle of the disc. 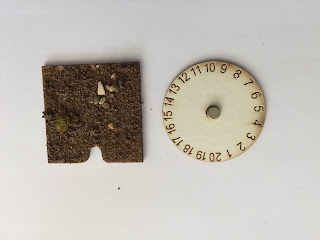 Add texture of choice to match the way yo base figures. 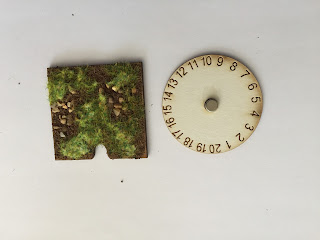 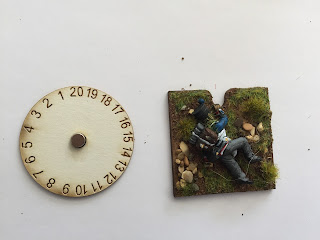 We normally add a casualty figure but anything can be used like shrubs, rocks, discarded weapons and equipment etc etc. Just let your imagination go here. 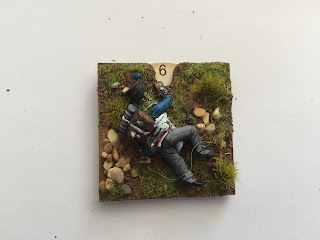 A finished infantry base 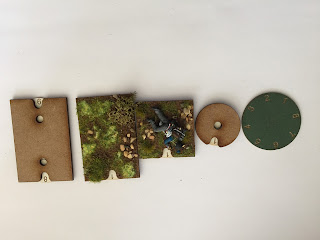 A selection of bases including double disc, cavalry, infantry and round versions. Discs can be green or white, particularly useful for the double bases.